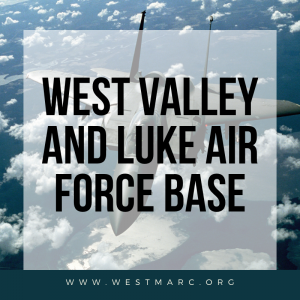 Residents of the West Valley, often hear “the sounds of freedom” emanating from above. The audible and visible signs of F-35 training missions represent the ongoing legacy of Luke Air Force Base. In addition to being home to F-35s, Luke AFB also houses F-16s, 4,300 active military personnel, 1,300 reserves, and 1,300 civilians. Together, the moving parts of Luke AFB contribute an unprecedented $2.4 billion dollars to the local community.

“For over 70 years Luke has trained the world’s greatest fighter pilots and combat-ready Airmen,” says Brigadier General Todd Canterbury. “As we build to hosting 144 of the world’s most advanced fighter, the F-35, Luke will continue this legacy for years to come. We look forward to continuing to grow with West Valley.”

While many are aware of the economic impact of Luke AFB, perhaps less highlighted, is the gaining traction of Luke AFB’s talented transitioning military.  While Luke has and continues to pump dollars into the West Valley, it also part of a valuable, skilled workforce pipeline.

Steve Yamamori, Reveille Foundation president. “And, depending on opportunities for employment, roughly 50% would consider staying in the West Valley.”

Part of why talented transitioning military remain in the West Valley is attributed to government, municipal, and public support.

“I remember going out to Luke Air Force Base as a young boy. I was mesmerized by the aircraft and the entire operation, and I am extremely proud that it has grown into the world’s largest Air Force base right here in Glendale,” said Glendale Mayor Jerry P. Weiers. “For decades, Luke Air Force Base has trained our country’s greatest fighter pilots and has also welcomed foreign partners like Norway, Italy, Taiwan, Singapore, Australia, and others.”

In fact, Luke AFB currently trains 75% of the world’s F-35 pilots. This means the West Valley is in a unique position to showcase itself to a broad audience. During their training, international military pilots plant temporary roots all over the West Valley, settling in communities like Estrella Mountain Ranch, Vistancia, and Verrado (among others).

“The ability to train with our allied partners from around the world helps build closer relationships with potential coalition partners in future conflicts around the world,” says James "Rusty" Mitchell Luke Air Force Base director, Community Initiatives Team. “Having partner families in our community exposes them to the unbelievable support that surrounds the men and women at Luke AFB. It also helps our families become more familiar with the Partner Nation’s customs and courtesies, that would otherwise not be possible.”

And, while basing the F-35 as the nation’s newest and most advanced weapon system ensures the continued economic contributions of Luke AFB for the next fifty years, the prospect of a critical mass of talented transitioning Luke AFB military into the West Valley Workforce remains positive.

Despite the optimistic 50% of talent that currently remain after aging out of service at Luke AFB, many West Valley economic developers alongside city, community, and government leaders continue to ask: “Can we do more?”

What can be done moving forward to entice Luke AFB transitioning military to remain in the West Valley?

Part of the issue, according to Yamamori, is correcting the disconnect surrounding employment opportunity and access.

“I believe there is a lack of awareness amongst transitioning military members and spouses on the opportunities for employment in the West Valley,” Yamamori says. “Transitioning out of the military can be a difficult process. Individuals are coming from an environment that directs them where to go and what to do for their entire careers and suddenly, they are expected to be self-starters and know how to navigate the community.”

Thankfully, resources such as the Reveille Foundation are helping to increase both awareness and opportunity.

“Reveille’s vision is to create better, faster pathways to success for all underserved populations no matter where they begin their journey,” Yamamori says. “Our goal is to take the wonderful work that is being done at the West Valley Military and Veteran Success Center and bring these resources throughout Maricopa County.”

Yamamori goes on to explain that The Transition Assistance Program or TAPS that every military member is required to attend before separation offers great information. Outside of TAPS, however, 80% of transitioning military personnel have no base access after separation and therefore cannot access resources.

“The sooner we can support these individuals and understand their employment desires,” Yamamori says, “the sooner we can match them with opportunities in the community and keep them in the West Valley.”

In addition to programs and foundations that bridge the gap between military service and the civilian workforce, continued community, government support, combined with incentives offer additional reasons to keep exiting military personnel in the West Valley.

“The West Valley and the state at large are very welcoming to military personnel, both still serving as well as those that are ready to transition from the military life to the civilian workforce,” Mitchell says. “Led by Governor Doucey, the elected officials of Arizona, have made it very clear that the state welcomes military personnel and their families to remain as residents.  The legislature has pursued tax incentives to further attract military personnel to call Arizona home.”

While the talent emerging from Luke is largely comprised of trained pilots and maintainers primed for work in airlines and engineering positions such as those available at Lockheed Martin, the potential to fill in additional employment needs is plentiful.

For their part, West Valley economic developers and partnerships such as those cultivated in WESTMARC are aggressively continuing to tempt employers who could benefit from the Luke AFB talent pool—and persuade them to plant roots in Maricopa County.

“Everyday acknowledgment of the sacrifices made by the military personnel stationed in Arizona is very impactful,” Mitchell says. “Every Airman in today’s Air Force joined knowing that that they were going to be placed ‘In Harm’s Way,’ and yet they raised their hand to serve. A pat on the back and a simple thank you goes a long way.”