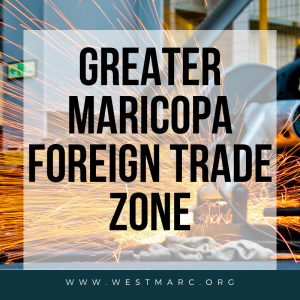 The Greater Maricopa Foreign Trade Zone (GMFTZ) has come a long way since it’s inception in 2010. Designed to foster economic development and attract new businesses to the West Valley, the GMFTZ offers manufacturing companies several cost-saving and operational benefits. Now, nearly a decade later, companies from all over the map are still taking advantage of the GMFTZ perks.

GMFTZ and its partnerships with West Valley FTZ-located companies are helping to contribute upwards of $344 million in investment through year-end 2019. An additional $795 in estimated investment is expected to occur in 2019 and 2020 as the construction of new buildings, infrastructure and equipment are occurring for Zone use within the GMFTZ Service Area.

According to Diane McCarthy, GMFTZ Board of Directors Chair, there are currently eight companies active within GMFTZ and an additional three entities that are anticipated to apply and be granted Zone designation by the end of 2019.

These nationally-recognized GMFTZ participating companies are not only helping fuel the West Valley economy, but they’re also providing employment opportunities—REI, RRB, and Sub-Zero as a few examples.

There were 1,616 FTE reported within the companies operated as sites within GMFTZ by year end for 2019,” McCarthy says, “With 700-plus additional new jobs expected by the end of 2020 as the new FTZ facilities are completed and become operational.”

In addition to adding jobs, GMFTZ recipient companies like Sub-Zero Group, Inc., are helping to elevate the perception of the West Valley’s often labeled as a “distribution region,” to also now encompass being an area recognized as a hub for “advanced manufacturing.”

This is a valuable notion considering that until recently, many companies seeking relocation would have dismissed the West Valley for perhaps not having the skilled talent for which advanced manufacturing employment opportunities require.

WESTMARC with GMFTZ and other local partners have made their mark in identifying, promoting and developing the West Valley’s workforce—a leading factor in site selection for many companies.

“Our company was planning a new product launch, the New Generation Integrated product with 23 new models and needed a location,” says Ron Jones, Sub-Zero Group, Inc.
corporate director of manufacturing. “Goodyear had the right and available facility to accomplish this and the Economic Development group supported the project incredibly.”

Sub-Zero is part of the eight companies active with GMFTZ, with an additional three companies anticipated to apply and be granted Zone designation by the end of 2019, according to McCarthy.

“The FTZ program is a tool that creates value for the company and the community,” Hoover says. “The company receives duty and customs efficiencies while the community benefits from investment in jobs and increased property values.”

“Foreign Trade Zones are ideal for manufacturing,” Jones adds. “Companies need to evaluate the imported parts/equipment coming into their zone and the cost/requirements of establishing an FTZ. If the companies qualify, they can defer tax payments on imported goods until processed and (unique to AZ and TX) reduce their personal property tax rate. “

While tax deferment is an obvious and undeniable advantage for manufacturers seeking to save, companies in an FTZ, such as those in the West Valley, can capture significant savings in shipping. The GMFTZ provides the following example:

As the GMFTZ reaches the decade mark, what is it that defines its continued success? According to Hoover, the health and prosperity of GMFTZ are attributed to regional collaboration and shared a vision.

“The West Valley cities came together 10 years ago to establish a foreign trade zone to encourage jobs and investment,” Hoover says. “The program has brought anchor employment to multiple locations in the West Valley and hundreds of millions of dollars of investment. The West Valley has proven its ability to collaborate and innovate with the success of the FTZ and continues to identify areas of opportunity and advancement for its communities.”