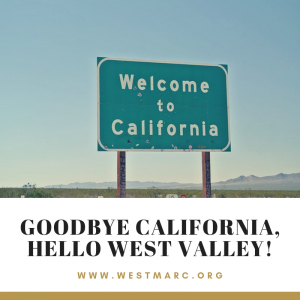 In 2018, the British Broadcasting Corporation (BBC) published a story titled, “Goodbye New York, Hello Arizona.” While it’s certainly compelling (and interesting) that our cousins across the pond featured the migration of New-York-based businesses to Arizona, our East Coast neighbors comprise about 10% of Arizona locates. Guess who holds more? That would be our direct neighbors to the West. In fact, California-based companies currently hold the highest percentage of out-of-state locates in our home state.

And guess who’s getting a piece of the California pie? The West Valley.

Maricopa County’s placeholder as the fastest-growing region in the U.S., combined with its proximity to California (and Mexico), certainly makes the West Valley a welcome landing spot. But, it’s not simply geographics that attract California-based businesses.

While much buzz has surrounded the West Valley’s highly skilled and abundant workforce, infrastructure plays a key role in attracting economic development. The West Valley serves as a major transportation hub and access point via the Loop 101, Interstate 10, Loop 303 and Loop 202.

“The West Valley’s strategic location creates easy access to three of the world's largest economies—California, Texas and Mexico,” says Allison Gilbreath, vice president of strategic initiatives for Arizona Chamber of Commerce and Industry. “Arizona is the only state in the nation within a day's drive of all these major world markets.”

Arizona’s southern ports of entry, in particular, serve as vital infrastructure to facilitate Arizona imports and exports with California and Mexico. According to the Arizona Commerce Authority, “More than 380,000 trucks crossed the Arizona-Mexico border with our border gateways expediting $31 billion worth of goods.”

While advanced manufacturing companies are certainly at an advantage due to the West Valley’s conveniently placed and well-established infrastructure, so are a host of additional businesses and industries. Tech, fintech, financial services, and healthcare hold an increasingly prominent space in the West Valley, planting roots in close proximity to popular (and growing) commute sheds.

“The West Valley will continue to capture tremendous growth possibilities over the next decade due to the 101 and 303—but especially the 101 East-to-West labor shed,” says Chris Camacho, president and CEO of Greater Phoenix Economic Council (GPEC).

According to Camacho, 340 companies are currently prospecting Greater Phoenix. Of businesses evaluating the market, 30% are from California.

“About one-third of our deals—usually out of 50 new companies who make an investment decision—locate in the West Valley,” Camacho says.

“The West Valley really benefits from the investment Phoenix area taxpayers made into building the South Mountain Freeway,” adds Christine Mackay, director for Phoenix Community and Economic Development. “The Loop 202 connection will reduce commute times for West Valley residents, moving around Greater Phoenix. More importantly, it opens up hundreds of acres of land for the South Mountain Technology Corridor that will bring high-value jobs significantly closer to West Valley workers.”

With California companies maintaining a position of 20% to 30% of GPEC’s transactional capacity for five years running, it’s not unreasonable to anticipate these percentages to rise with the continued growth of infrastructure and skilled labor.

“The West Valley’s workforce has been its quiet asset for years,” said Christine Mackay, Director, Phoenix Community and Economic Development. “Companies are now seeing that there is significant value in tapping the experience and density of qualified workers living west of Interstate 17.”